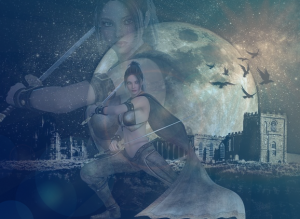 In the symbol of the sword we see yet again, a principle of this planet embodied. It is a principle that was required of this planet and throughout this planet, you have, if we use time, quite rapid proliferation and withdrawal. That sword is indicative of the principle that was imposed upon this Logos—you call it killing. You observe what you term death on every hand over the planet—it matters little whether it be a tiny insect or whether it be a great organism—death—and that sword postulates that principle of the planet.

The dove has been used as a symbol from early times. What you are seeing is a manifestation of the various forces that emanate from and through this Logos, symbolized, and in each case, humankind has treasured these symbols and used them in various ways, and they appear in various forms of meditation because they are basic to this planet. The dove is a symbol of enlightenment—not peace as humankind often thinks—it is a symbol of enlightenment and perhaps accomplishment, the two words are interwoven.

The egg is of course somewhat self-evident in that there is not one life organism on this planet, which does not begin its history, its cycling as an egg. Again we look at an inherent planetary principle, and that egg purely symbolizes that which is the operation of this planet in its proliferation.

We will except the maze from that which we mentioned. It is not inherent in the planet. It is the outcome of mankind’s desire to get back, mankind’s desire to return, as we mentioned earlier and his inability to find the way back. It is not plain, it is not straight, it is not open, and he tries; he tries this, he tries that; and so the maze symbolizes the attempt of mankind to find a pathway that he blindly is aware, exists.

death, proliferation, the dove, the eagle, the egg, the maze, the Planetary Logos, the sword, the withdrawal force

Power of the Tarot
Supernatural Men and Women